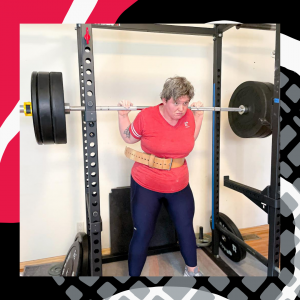 Girls Inc. of Santa Fe is an organization that makes an impact. Not just on the youth who attend, but also on the staff members. It encourages taking healthy risks, personal growth, and taking pride in success.

It also means that our team is empowered to take their next steps. And while we are so proud of them for this, we also know we’ll feel sad when they go. In July, our Communications and Volunteer Coordinator, Julia Gay, will be moving out of state to be closer to family. She says, though, that means she has to leave another home and leaving home is hard.

“People have been asking me what I’m going to miss the most about living here. I think I’m supposed to say the big sky or the sunsets or the food (which, yes, I’ll miss). But really, it’s Girls Inc. Seeing the girls grow up, watching the organization grow and evolve over the past decade. It has meant everything to me. I’ll also miss the building’s ghost. I won’t miss the basement.” 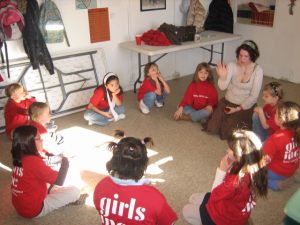 She graduated from the College of Santa Fe in 2005 and was looking for a way to be of service. With a family that worked on the state government level or in media, she grew up with the message of serving her community. In 2006, she saw that Girls Inc. of Santa Fe was hiring. Like many other people in town, she knew it as that place downtown with the big driveway and the red sign.

With a sigh, she recounts how she bombed her initial interview, admitting “the only saving grace was how I interacted with the girls when I did my first follow. They set up chairs to be a school bus and they told me to be the driver. We turned it into a kind of parade where the girls were dancing in a circle around the chairs waving wands and we were all singing.”

Throughout the next few years, as a Program Facilitator, she gained a lot of new skills and experiences. How to honor emotions, non-violent 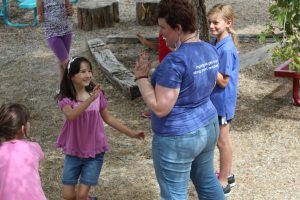 communication, and mentoring became a part of her daily life, both in and out of GISF. Not just the serious stuff, either. She learned how to have fun and how to make activities more impactful and exciting. Flexibility and adaptability, which she admits still aren’t her strongest suit, helped her ease some control and anxiety struggles.

“Sometimes you got to put the task aside and go play outside, you know?”

She attended a low-residency graduate program in Maine, allowing her to live in New Mexico and continue working at GISF. After giving birth to her son in 2013, she left to focus on raising him, only to realize she couldn’t stay away, so she came on as a board member. After serving for four years, she resigned to return to work at GISF. 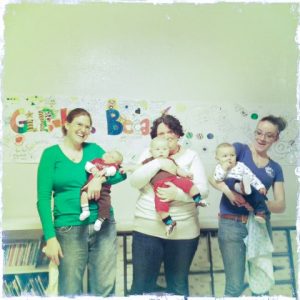 She came back on as the new Volunteer Coordinator, taking on additional responsibilities of Communications during COVID. Being with GISF during many transitions, this one was the biggest learning experience, both pre and post-COVID.

“My job is interesting in that I work with every department. There are so many different aspects to my work. I’m an organizational historian, a program liaison, a stewardship coordinator, and a repository of random information. When you work for any place as long as I have – almost 15 years – you just know stuff. Most of our staff has been with us for multiple years and many others return every summer. It really speaks to the culture of GISF. Staff is supported and trusted.”

Being with GISF so long, there must be some part of it that’s her favorite. “So much,” she says, “but it always goes back to the girls. I’ve seen kids I’ve had in my groups go to college, get amazing jobs, have kids of their own, or even return to work with us. They’re all so amazing.”

Of course, it wouldn’t be a “Work Like a Girl” interview without the “If you could tell the girls of Santa Fe and New Mexico something, what would it be” question. 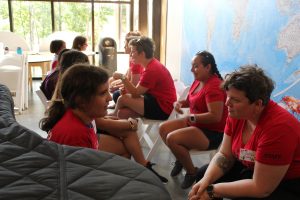