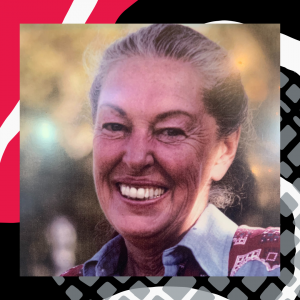 Betty grew up in Ohio but always dreamed of being a cowboy. She loved all kinds of outdoor activities, which painted her as a tomboy. Fishing, hunting, and camping were all ways she got out and experienced the world around her and spent time with her father.

At forty-six, Betty made an adventurous choice that would make a huge impact on her life and the community she found herself in.

After the death of her husband, she packed up her family and traveled all over the Southwest, wanting her children to experience the authenticity of life in that area. Though they visited Colorado, Arizona, Texas, and Utah, she kept returning to New Mexico and the Santa Fe area. During one visit to Tesuque, Betty found a dude ranch that was for sale. She reopened this dude ranch, formerly Rancho Del Monte, as Rancho Encantado. But that wasn’t the end of her amazing life and story!

Famous people and celebrities like Maria Callas, the Dalai Lama, and Johnny Cash, were all drawn in by Betty’s personality and the beautiful resort. She was famous for her uncompromising character and sense of humor (April Fool’s Day was a big holiday at the resort). Beyond that, her generosity and giving spirit were well known. “There was this one bitterly cold winter night when the gas line broke for all the Tesuque residents,” says a neighbor. “And she put every last one of them up at the hotel.”

The founding of Rancho Encantado was just one of her many accomplishments. Betty “was given the Order of the British Empire by King George— the most esteemed award for gallantry in war as a WAC (Women’s Army Corps) during WWII.” In 1970, she also founded the Tesuque Fire Department and served two terms as fire chief. Not only that, she was the first female fire chief in the U.S, an accomplishment that got her in the Guinness Book of World Records!

She died in 1992, but Betty Egan’s impact lives on to this day. Betty demonstrates that it is not what you do, but who you unapologetically are, that creates a legacy. Her attention to detail, passion for following her dreams, and her unique approach to life cemented her as a legacy and role model.